Bhutan is a tiny kingdom with monochrome landscape which gives a vivid colour to the country. The word Bhutan was derived from a Sanskrit term "bhotant" meaning 'the end of Tibet'. It is usually said that the Bhutanese people refer their country as "Druk Yul" which means "The land of Thunder" and themselves as a Drukpa people. Bhutan, a landlocked country is located in the heart of Himalayan mountain range sharing its boundary with China in the north and with India in its east, west and south. Bhutan covers the total land area of 38.394 km2 and 1.1 % of water. The land of Bhutan consists of high mountains, steep hills, swift rivers with crisscross network which drains out to the Indian plains which mainly includes the northern parts of Dooars. Torsa, Raidak, Sankosh and Manas are the important rivers flowing through Bhutan. Thimpu is said to be largest city and also the capital of Bhutan. Bhutan is a country of various landscapes, which ranges from sub-tropical plains to sub-alpine Himalayan range where some peaks are higher than 7000mt. The state religion of Bhutan is Vajrayana Buddhism and almost more than three quarters of the population follow Buddhism and second comes the Hinduism. The political system of Bhutan was transformed to Constitutional Monarchy from Absolute Monarchy in 2008. 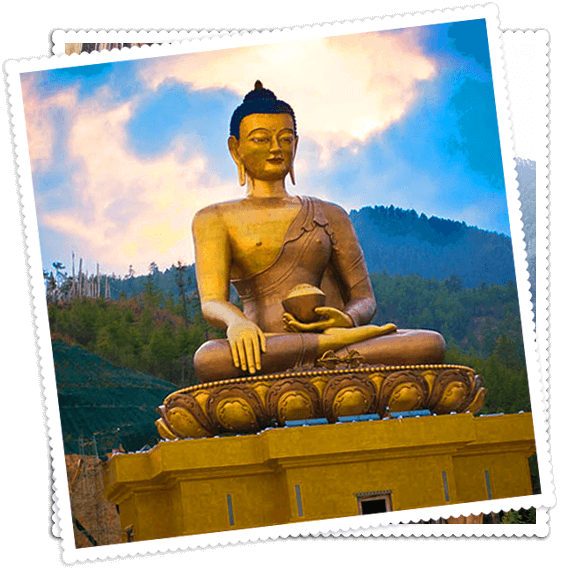 Now Bhutan follows the Constitutional Monarchy with the Parliamentary form of Government. Jigmi Khesar Namgyal Wangchuk was crowned as the king of Bhutan on 6 of November 2008 and he acts as a reigning monarch. Bhutan a small country is very rich in its traditions, culture, language and religion. Dzongkha is said to be the national language of Bhutan, which is said to be one of 53 languages in the Tibetan language family. The high culture and traditions of Bhutanese people can be seen all over Bhutan, they wear their national dress 'gho' which is said to be men's dress and 'kira' a women's dress and in order to make their identity more stronger the Bhutan Government has implied a law to wear their national dress while attending Government offices, schools, universities, etc. Bhutan has been ranked 84th happiest country of the world in 2016 in World Happiness Report published by United Nations. Agriculture, forestry, tourism and sales of hydro electricity to India are the main economy base of Bhutan and almost 55% to 60% of Bhutanese people are dependent on agriculture for their livelihood and some are engaged in handicraft industries. Though being a small country, the present economic standard of Bhutan is growing faster. In 2007 Bhutan had ranked Second fastest growing economy in the world. And in terms of transportation the lateral roads of Bhutan connect the different places of Bhutan as well as air route of Bhutan links Bhutan with the other countries of the world. Though Bhutan has no UNESCO World Heritage Sites but there are lots of tourist spots to be visited in Bhutan. Tourism in Bhutan is growing in a faster rate these days. Bhutan tourism is gaining its impetus as it is well known as a 'land of Monestry' and for trekking, hiking, and other adventurous trips. Due to its magnificent location and attractive culture and traditions a high number of tourists usually get attracted to this small country. It is recorded that in 2014 Bhutan received more than a lakh of international tourists. The tour Packages of Bhutan is easily available in the best rate which includes all sightseeing, travelling, accommodations and fooding.

How to reach Bhutan:

When to visit Bhutan:

Spring and autumn are the best times to visit Bhutan as in spring time you will get to view the beautiful floral covered Bhutan and autumn makes a perfect time to see the festive season of Bhutan as most of the festival of Bhutan usually takes place in September and October and the climate too seems to be favourable. The folk dance which is said to be the tradition of Bhutan is also one of the attractions of Bhutan tourism, this folk dance is popularly known as 'Cham Dance' to the Bhutanese people which are performed during their festive seasons. Cham Dance is said to be an offering to a god or a type of meditation which are mostly performed in the festive seasons of Bhutan and is also said to bring blessings to the onlookers.

Best places to visit in Bhutan: