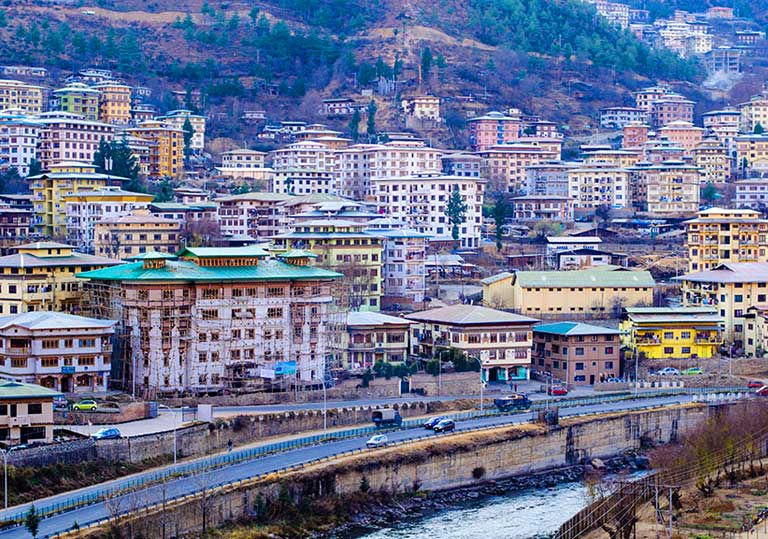 Thimpu the capital of Bhutan is also the largest city situated in the western central part of Bhutan at an altitude which spreads over 7,357 ft to 8,688 ft in a north south direction. According to its high altitude Thimpu is said to be the third highest capital in the world. The western part of the Thimpu valley is formed by the river Raidak which is also known as Wang Chu or Thimpu Chu by the Bhutanese people. Before Thimpu Punakha Dzongkhag was the capital of Bhutan but later on in 1961 the capital was shifted to Thimpu.

Thimpu is the main centre for all the culture and traditions of Bhutan and not only this Thimpu is also the centre for commercial and political activities of the country. Most of the important buildings of Bhutan are found in Thimpu which includes the National Assembly, the official residence of the King which is also known as Dechencholing Palace. Thimpu is the most developed and modern city of Bhutan with all the modern facilities such as high class hotels, restaurants, cyber zones, night clubs, shopping centres, etc. Along with all these Bhutan tourism has made a great place in Thimpu Valley as the visitors can view the mixing of both ancient and modern culture and tradition of Bhutanese lifestyle.

How to reach Thimpu:

If you are travelling from Phuntsholing it may take about 4 to 5 hours of road journey. Bhutan Transport Corporation regularly runs the state buses from Siliguri, India or on reaching Phuntsholing you can hire a taxi to reach Thimpu. If you are travelling by air then you need to take a flight till Paro airport, the only international airport in Bhutan and travel 54 kms by road to reach Thimpu.

When to Visit Thimpu:

The wet season of Thimpu starts from May and ends in September and the other months seem to be dry. So the spring and the autumn make the best time to visit Thimpu.

Places to visit in Thimpu 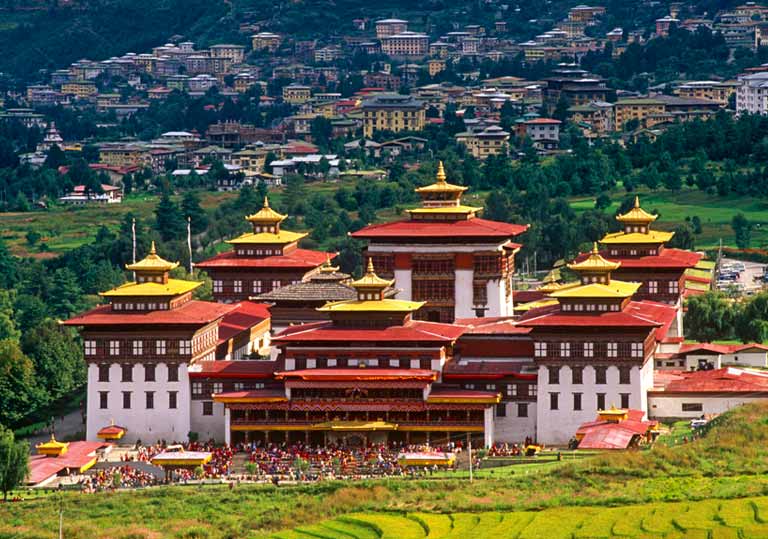 Trashi Chhoe Dzong comes under one of the most popular tourist visiting places in Thimpu which is located in the northern edge of Thinpu. The Dzong is close to the town of Thimpu surrounded by beautiful lawns and gardens. It is the place of celebration of Thimpu Tsechu, the famous celebration of Buddhist religion. It is also said to be the seat of the head of Bhutan Civil Government or Druk Desi. The original Trashi Chhoe Dzong was built in 1216 AD by Lama Gyalwa Lhanangpa of Bhutan who also founded the Lho Drukpa sect which is the distinctive Buddhist Sect of Bhutan. It is said that the original Dzong was located above the present Dzong of Thimpu where Dechen Phodrang now stands. Since 1968 Trashi Chhoe Dzong has been an important seat of Bhutan Government. The Dzong constitutes of the throne room and the office of King with the ministers of home affairs and financial affairs. The structure of Dzong seems to be very impressive with large spires on its top, which are made of gold. It is The Dzong has been destroyed by fire for three times and hit by a massive earthquake causing serious damages to the Dzong, each time it was rebuilt by Druk Desi and Je Khenpo of the time. 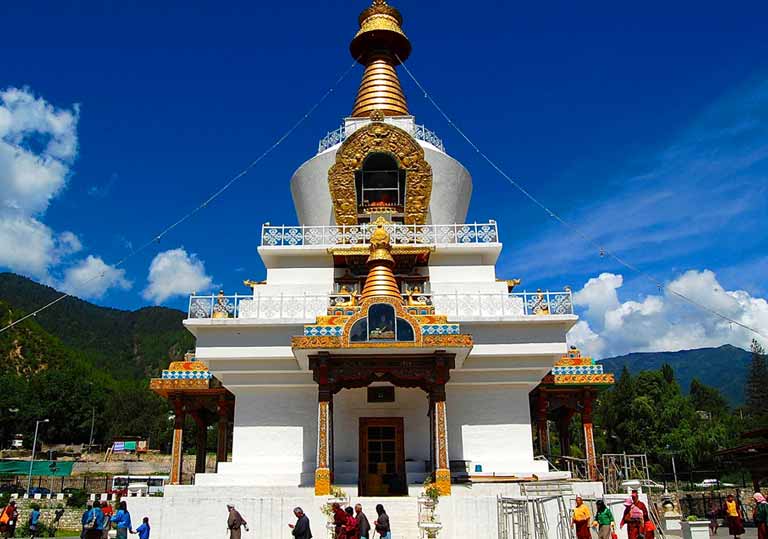 The Memorial Chorten of Thimpu which is also known as Thimpu Chorten was built in 1974 in the memory of the Bhutan's third king, King Jigmi Dorji Wangchuk who is also known as the father of Modern Kingdom of Bhutan. Thimpu Chorten is situated in the southern central part of Thimpu city. It is one the popular attractions of Thimpu which is also one of the religious landmarks of Bhutan. It is said that the Chorten of Thimpu was built according to the traditional and religious aspects of Buddhism. The Memorial Chorten constitutes of golden spires crowning it with a huge pyramidal shape. The Chorten seems to be the heart of Thimpu city. With a small garden and its classic structure it stands as one of the most religious structure of Bhutan and Thimpu city. The three floors of Chorten contain large numbers of teachings of Nyingmapa sects and the top floor has the beautiful painting that gives knowledge of Nyingma School. You will get a beautiful picture of Thimpu city and the surroundings from the gallery of Chorten which is built on the circumference above the top floor. A great festival known as Monlam Prayer Festival is held in the Chorten by Je Khenpo who is the religious head of Bhutan. Many people come to visit the Chorten during this time for the blessings, even large number of tourists are seen during this period. 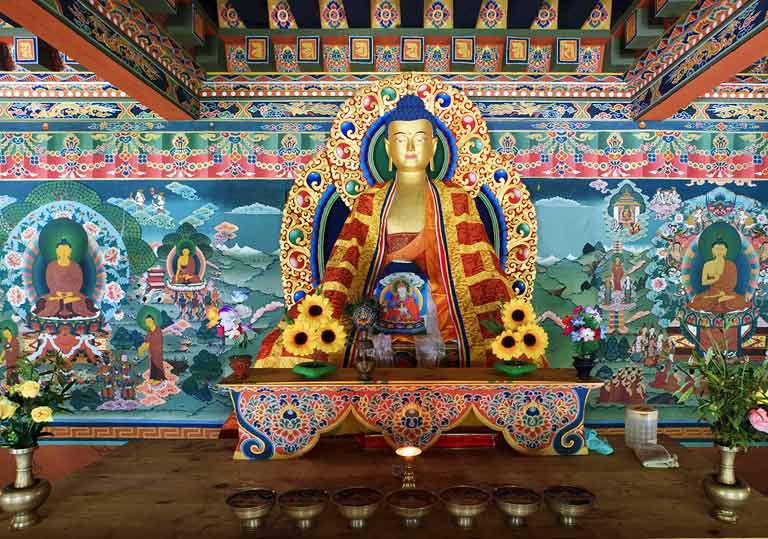 Simthokha Dzong is situated 5 kms away in the southern part of the city lying in the low ridges of Thimpu Valley and gives the picturesque view which covers an area of about 650 square ft. Simthokha Dzong is one of the oldest Dzong of Bhutan popularly known as Sangak Zabdhon Phodrang which was built during 1629 by Zhabdrung Ngawang Namgyal the man who unified Bhutan. Simthokha Dzong is a Dzong having lots of historical impacts which was a Buddhist Monastery before and now it is an institute to learn Dzongkha a Bhutanese language. The Dzong is three storied and the lower most floor is covered with the prayer wheels and carvings which are carved in a slate. The main Lhakhang or temple constitutes the large statue of Buddha (Shakyamuni) and the statues of eight Bodhisattvas on its both sides. The quiet and the peaceful location of Simthoka Dzong add more beauty to it. Visitors are usually attracted by its architectural structure and its beautiful and peaceful surroundings. 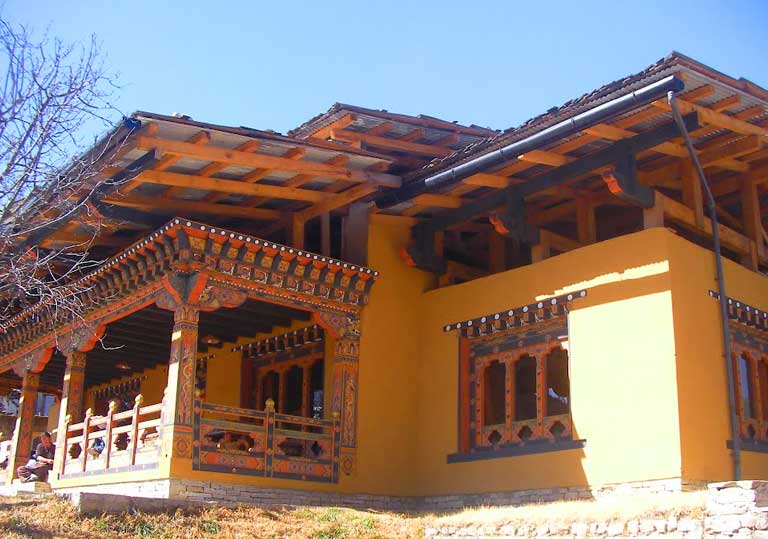 The Folk Heritage Museum of Thimpu is a 19th century traditional house which was established in 2001. It is located in Kawajangsa, the heart of capital city which is just a few minutes of walk from National Library and the National Institute of Zorig Choesum. The museum is mainly set up to display the lifestyle of the local Bhutanese people. Most of the visitors are students and tourists. They mostly visit this museum to know the culture and traditions of Bhutan. The museum mostly puts an effort to highlight the way of living in rural areas of Bhutan displaying the typical household articles, tools and objects used by them. You will have an opportunity to come across the great restaurants which will serve you delicious local dishes of Bhutan. You will also be able to taste the best local food of Bhutan even if you are vegetarian or non vegetarian both are served in this restaurant. Tourists usually enjoy the food a lot and become a great fan of local dishes of Bhutan. You will get different experience in this museum so if you are travelling to Thimpu don't miss to visit this wonderful place of Bhutan.